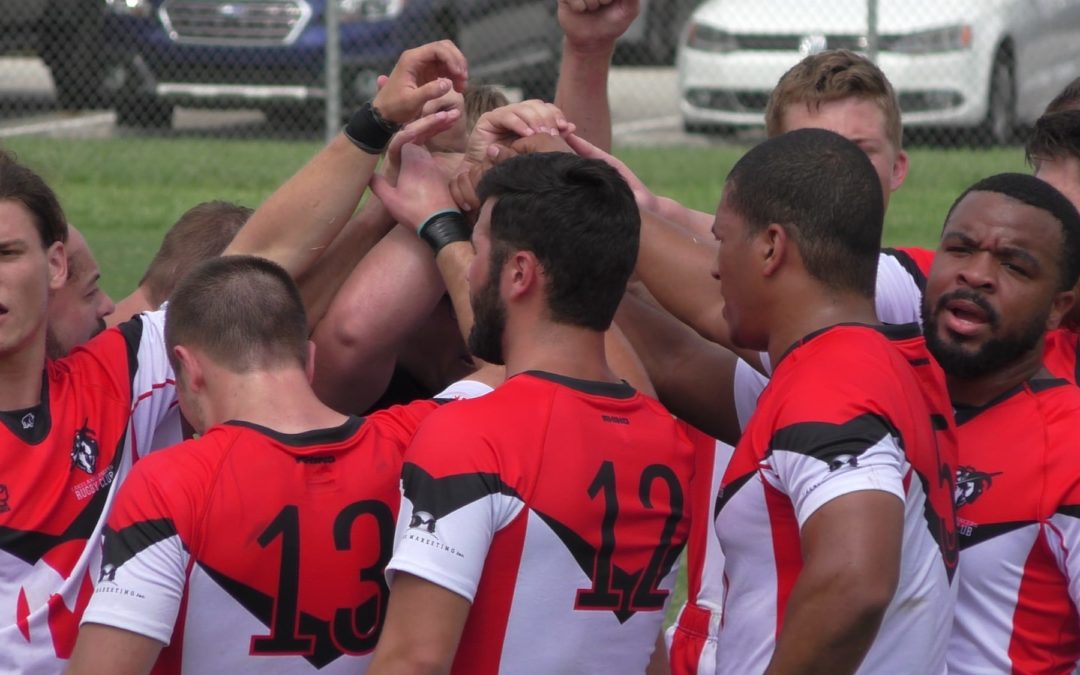 “When I started playing with the Lakeland Lancers I was out of shape and looking for but struggling to find a community of friends. Even though I was completely new to rugby the team immediately took me in and began working with me. Everyone has been amazing and it would have been hard to find a better group of people. Almost overnight I made 22 friends. Over the last year I have lost 40lbs, I have been challenged both physically and mentally, I have grown as a person in a variety of ways and the confidence this has given greatly improved my life. My life is radically different from a year ago in amazing ways and most of that can be traced back to my decision to join the Lancers and play rugby”

“Sometimes pursuing a career means you have to leave your family, friends, and current lifestyle to pursue new opportunities. When I received a big career opportunity, I decided to make the move from Arkansas to Florida. I did not know a single person in the state and had no community to be a part of. In college, I played club rugby for the University of Arkansas and I knew how much I loved the sport. After moving to Lakeland, I found out there was a local club and decided to try it out. This club has changed my life. I have been surrounded by friends that I now consider family. They have been there whenever needed both rugby and non-rugby related. Though the sport is phenomenal, the most amazing part is the community. No group has been so accepting or welcoming. I strongly encourage anyone to come out and vice rugby a try. You might just walk away with friends that last a lifetime.”

“I never had a big family growing up nor the best situations to be in this team is more than just a group of guys to play a sport on the weekend with. These guys over the past year have quickly become the best family I never thought I would be apart of! This team is consistently trying to better themselves and everyone around them and lift the spirits of everyone. This is a true band of brothers with a high level of Camaraderie! I owe a lot of my success and happiness to this family! They’ve helped me in my experience to get better at a sport I had never played, they’ve helped me get in better shape physically, and boosted my morale with all things by letting me feel like apart of the family!”

“I’ve always been a little afraid to commit to anything too athletic, but especially something that would spotlight my inabilities and insecurities to others—a team of any sort. I’ve always struggled with my weight due to a lack of nutritional and physical education, and I’ve also gone through a lot with trying to find a way to improve my mental wellness. I was tired of pushing the commitments off to the next day or week, and I decided to join a friend for rugby practice with the Lakeland Lancers as a way to jump in and work my way down to maybe a few days per week at the gym. That didn’t happen. I was hooked (no pun intended). The mental wellness came first. I fell in love with the game, felt like I fit in with the guys, and I gained a positive outlook each day that I later attributed to the adrenaline and endorphins I wasn’t used to releasing. Next, I began to drop weight. Within 6 months I dropped 60 lbs and became more conditioned for the game in the areas of cardio and strength. I still love it and look forward to playing every chance I get. I’m still losing weight and gaining positive experiences. For me, finding the Lakeland Lancers wasn’t just finding a hobby, but finding another family, a transformative routine of mental and physical wellness, and passion that I can’t imagine giving up. The hardest part all along, was deciding whether or not to go check out the first practice. If that’s you, do it.”

“After separating from the Navy it was hard for me to find my place. I was with a group of people that all shared the same struggles, the same problems, and the same successes. I was on Facebook one day and saw an advertisement for Rugby. I thought to myself, Why not, what do I have to lose. I am so happy with the decision I made. I found a group of guys that took me and and treat me now like family. We are all so close and it is so reassuring to have a family in a place you are not from. The Lakeland Lancers brought me in and taught me to play rugby directly, but with in that they taught me communication, teamwork, and decision making. Joining this team helped me in my personal life as well as my athletic life.”

“Rugby is fantastic. Even if you suck at it. It’s not a game, it’s a culture. Never in my life have I made so many friends in one year. These guys keep me motivated to get healthier and always aim up. A couple times a week at practice you get to forget about all your problems for a couple hours and work out and play games and improve your skills. You get to travel all over the state and meet other people and join them for a social after every game. If you are new in town and looking for some guys to hang out with this is the fastest way to grow your social network. You’ll find someone that is like you. Rugby players are cooks, entrepreneurs, engineers, doctors, lawyers and even ministers and they are young and old and every age in between.”

“As a VP for the #5 IT firm globally (CGI) and having been with them for 25 years, I can tell you there are numerous benefits to participating in a team sport like this. Aside from the physical benefits of participating, there are several interpersonal skills that translate directly to your work-life. One of the most overlooked and undervalued attribute in the workplace is working collaboratively as a team. Being able to communicate effectively, understand what’s happening around the team and appreciating other perspectives is critical to the success of any team. Being part of a highly functioning team that is also multi-generational is not only tremendously valuable, but surprisingly gratifying. Each and every person on that team, whether they realize it or not, is developing skills that they will be able to leverage for the rest of their life. On a personal note: As a 54 year old taking up a contact sport for the first time, I personally have enjoyed developing relationships and bonds with young and old, and has given me something to look forward to on a daily basis. Spending time with the ‘Young Guns’ truly brings a smile to my face and the openness you guys have afforded me has been overwhelming. And I thank you for that.”

“Coming from a 48 year old rookie (at the time) the Lakeland Lancers allowed me to fulfill a desire I had to play rugby since I was introduced to the sport back in 1991 while stationed in England. I was at my local gym one day and seen a sign for playing rugby in Lakeland and I said what the heck. I was told to just show up and we will show you the ropes. I’ve been hooked ever since. The Lakeland Lancers Rugby Club is filled with an amazing group of men and women who are dedicated to this sport and helping it grow to its fullest potential here in Central Florida. If they can take a 48 year old rookie and train him to play against well established teams and get man of the match. Imagine what they can do for you.”